Zox and his Gorldtsuikar family have come from Kaizoku Topia (Pirate Topia). They travel to different worlds with their Pirate Ship. Zox is the eldest son and as seen in his first appearance, he likes to sing. Flint who is the younger sister of Zox is in charge of creating the Sentai Gears for Zox. She & Zox stole the blueprint of Geardaringer from Tojitendo. When Gorldtsuikar family traveled to Gokaiger's world, Flint fell in love with their design and thought it was cool. B
3140

JASRAC (Japanese Society for Rights of Authors, Composers and Publishers) had announced on April 28 that Japanese Music Composer Shunsuke Kikuchi has passed away on April 24th, 9:16 PM JST at the age of 89. The cause for his death is Aspiration Pneumonia. He took his final breath in a Medical facility in Tokyo. The funeral will be held only about the family members and relatives and his eldest son will be the mourner. Shunsuke Kikuchi was known for composing the famous Doraem
580

Ultraman Trigger when he uses Circle Arms has it's own set of Finisher. 1. Multi Type - Zeppelion Sword Finish He can cut the enemy in half with this 2. Power Type - Deracium Claw Impact Trigger inserts the Circle Arms (Claw mode) on earth which generates seismic waves which attacks the enemies. 3. Sky Type - Runboldt Arrow Strike Beam is emitted from the Circle Arms in Arrow mode. First Scan of Ultraman Trigger where he is performing his Zepellion Beam on Tyrant. He has a at
3200

Staceaser's Robo will be called as Battle Ceaser Robo. Just like how Staceaser is based on Battle Japan, Battle Ceaser Robo is based on Battle Fever Robo. That's enough of spotlight for Staceaser. Time for some focus on TwoKaizer next. TwoKaizer will use TwoKai Kattana Gear to transform into Shinken Form and similarly TwoKai Rikki Gear to transform into Ohran Form. When their Gears are used, they (Kattana & Rikki) themselves combine with TwoKaizer. It was a bit unclear on Oh
3900

Kamen Rider Solomon Omni Force (Master Logos) will use the Wonder Ride Book Omni Force to transform. Omni Force Ride Book contain a part of the power of the Almighty book. Though the name of his Seiken is not yet revealed nor his Buckle. He will use golden version of King Excalibur and his buckle will be similar to that of Calibur & Saikou. He has Sword of Logos symbol on his armor. As spotted in the recent filming leak video, Sabela & Durendal will go against Master Logos /
1,4650

Official DX Toy images of GUTS-Select's Mechas → GUTS Falcon & Nursedyssey-gou. I was expecting Nursedyssey-gou to be gold but it is silver. It looks like this sky base can transform into Nurse when required. GUTS Falcon kinda reminds you of GUTS Wing from Ultraman Tiga.
2280

Master Logos' Rider form will be called as Kamen Rider Solomon Omni Form. It was expected to look like Kamen Rider Calibur Jaou Dragon as per the early leaks. But who knew that it will look this cool.
2880

It has been a yearly tradition for Kamen Rider to appear in Oronamin C's Commercial. Even this year Kamen Rider Saber's Cast & Riders appear to promote the Drink. Since Kento is fallen into the dark side as Kamen Rider Calibur in TV Series, I was expecting it would be Touma, Rintaro & Yuri who will be appearing in the commercial currently. But turns out I was wrong. Espada Kento appears in the Commericial along with his Raimei-Ken Ikazuchi. There is along a Web Movie where th
1330 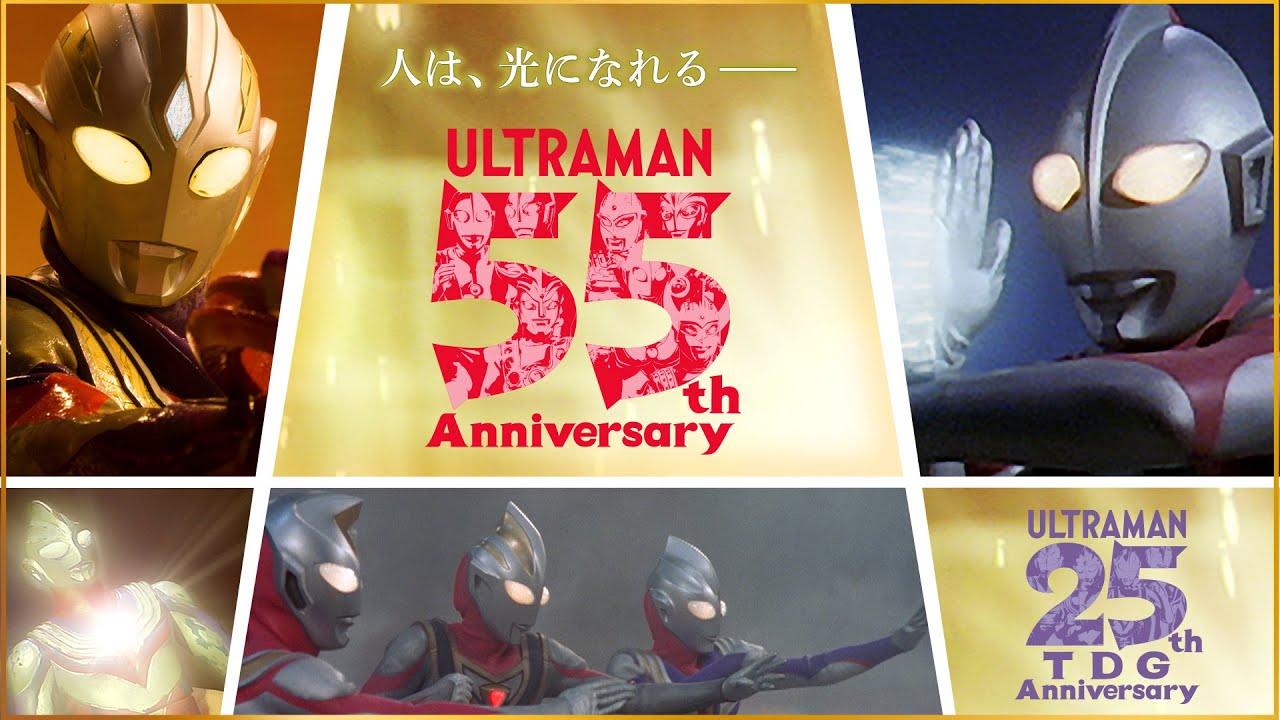 Tsuburaya Productions has released a second promotional video for Ultraman 55th Anniversary & TDG 25th Anniversary. The Promotional Video starts of with a short clip of upcoming feature film Shin Ultraman where Shin Ultraman makes his first appearance followed by the scene from Ultraman Tiga where Eiji Tsuburaya meets original Ultraman. It continues with the narrator saying "When I first saw Ultraman with my eyes, I felt like I have met God. I thought that he is the one who w
660

It's been 10 years since KAMEN RIDER GIRLS debuted with their first single "Let's Go RiderKick 2011". This year they are celebrating their 10th Anniversary and also going to release a Cover Album on May 20 which is titled as "starting point". The album will contain the cover of their own Rider's Opening Songs. Anything Goes! (Kamen Rider OOO) Life is SHOW TIME (Kamen Rider Wizard) JUST LIVE MORE (Kamen Rider Gaim)
2970

Masashi Mikami who plays Kenshin Nagamine / Previous Kamen Rider Blades had confirmed that he is going to reprise in Kamen Rider Saber Episode 32. Maybe he will appear as an illusion (Thoughts) created by Tategami Hyoujuu Senki Wonder Ride Book.
2450

Actor Mahiro Takasugi (Mitsuzane Kureshima / Kamen Rider Ryugen) who had announced about his resignation from his previous agency - Spice Power in November, 2020 has released a statement about starting his own company "POSTERS". This was announced yesterday (April 18) which is 7 days after his end of contract with Spice Power. A promotional video was also released in his Instagram where he had revealed the meaning behind naming his company as POSTERS. "The origin of the compa
2960

Kamen Rider Genms To Have a Continuation?: TTFC To Make Big Announcement in May

TTFC had decided to reveal the Visual of Kamen Rider Genms -The Presidents- after the end of the show. But they have revealed that they are planning to stream Making Video of the spin-off. Looks like they are taking inspiration from Marvel's Assembled. Anyway, along with this announcement they have teased that they are going to make a bIg Announcement on May 2nd. The details are not revealed. Is this related to the ending of Kamen Rider Genms where our God Kuroto Dan still ex
2841

DARKNESS HEELS the Ultraman Stage Show which focuses on the popular Villains - Ultraman Belial, Camearra, Evil Tiga, Dark Zagi & Jugglus Juggler gets adapted into a Manga as "DARKNESS HEELS -Lili-". Monthly serialization of this comic starts from April 23 in ComicWalker with first episode consisting of 50 pages. This manga is planned to have a total of 25 episodes. Story Guide There is a conflict going for a long time on Planet Foos. Nation is divided as Upper & Lower class c
1,0090

Ultraman Trigger Toy Listing released has also listed King Joe Storage Custom. Could this point at crossover between Ultraman Z & Ultraman Trigger in TV Series? By the way, they will also be Ultraman Z Hyper Key which will be released. The list had also revealed the titles of the three new Dark Giants. Youkai Warrior Carmila Rigid Fighter Dargon Agile Tactician Hudrum Some other monsters which are going to appear in the series. Gazoto Powered Dada Gargorgon Zaragas Nursedyss
4750

Zenkaiger Episode 8 will be the debut episode of Zenkaiger's new ally - Zox / TwoKaizer Kikai Sentai Zenkaiger Episode 8: "Different World from Door to Door?!" Air Date - April 25 Tojitendo's Assasin Stacey (Staceaser) summons a large number of Super Sentai Robos one after the other. He will also summon fake Super Sentais. Juran (Zenkai Juran) and others confront them but they get badly beaten up by the Fake Robos. Barashitara arrives to the battlefield along with Door Warudo
6380

Meet Zox. The guy who transforms into TwoKaizer. He is dressed in similar fashion as the Space Pirates. So is he a Space Pirate? By the way, the actor Atsuki Mashiko who plays Zox had previously played Gurasha / Proto Baron in Kamen Rider Zangetsu Stage Show. He is also the member of avex's dance & vocal group GENIC. By the way, check out the actual images of TwoKaizer Shinken Form & Ohran Form from TwoKaizer TwoKai Narikiri set
4850

Zenkaiger Toy Listing for July & August has revealed the Zenkaiger upgrades. 1. Zenkaizer & TwoKaizer will transform into Super Zenkaizer & Super TwoKaizer using Zenkai Juu Gear. As per Akkinews, this Zenkai Juu Gear will be pretty much similar to Kamen Rider W's Fang Memory. 2. Super Zenkaizer will look similar to GouRyuuJin from Zyuranger. 3. Super TwoKaizer will have Gokai-Oh like face and the body of V-Rex from Timeranger. Guess the point of this upgrade is to make the hu
1,3020
1
23